The promotion has ended but we encourage you to check out our solar products to meet your off grid energy needs.
TRY ZIPIFY PAGES!
HELIATOS SOLAR WATER HEATER KITS
Whether you are homeowner who wants to save money on your power bill, or you need hot water while you're off the grid, Heliatos's solar water heating kits provide you with clean, reliable power from the sun. Plus, they're easy to install and maintain.  Choose one of 5 solar water heating kits below. 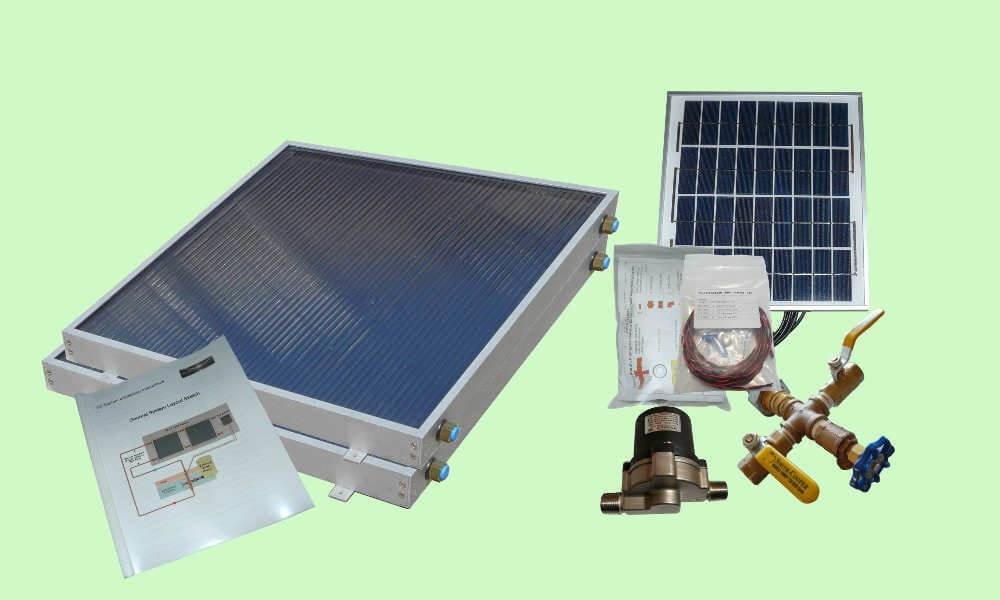 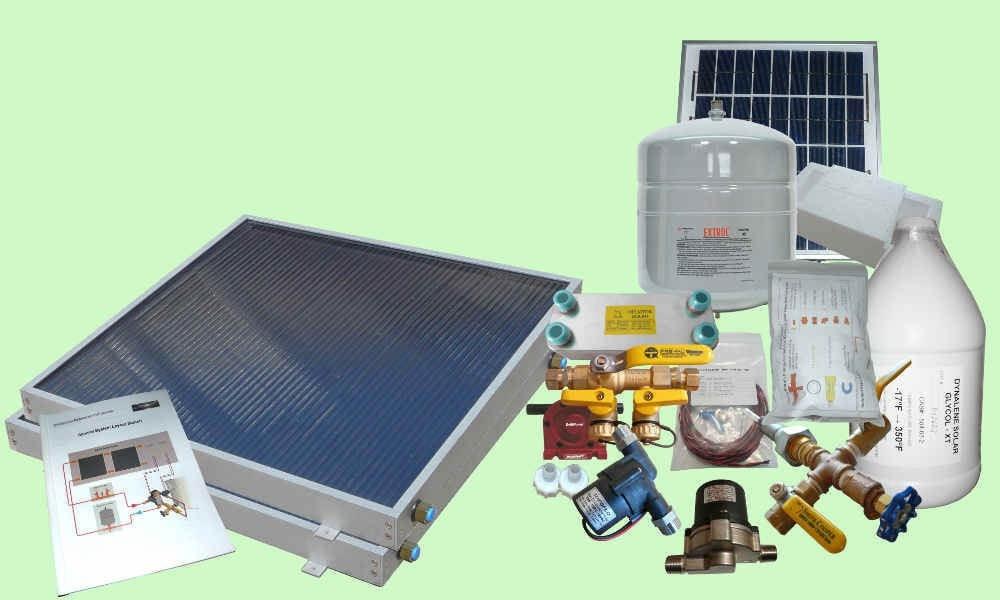 Solar Water Heating Kit GH - For Areas Where It Freezes 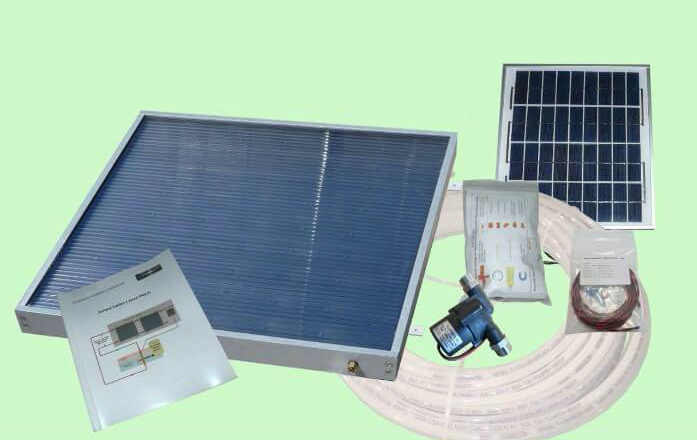 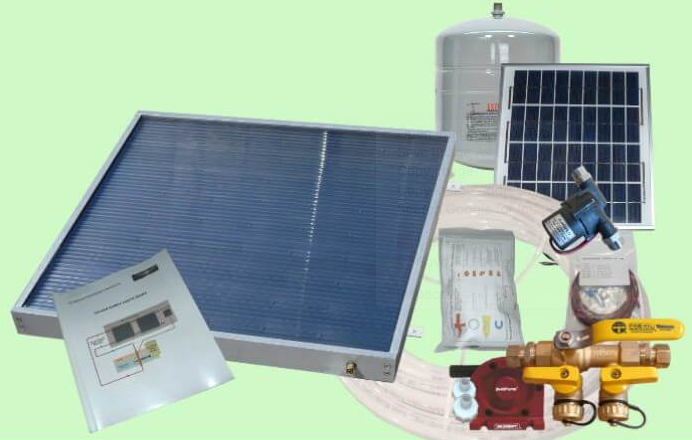 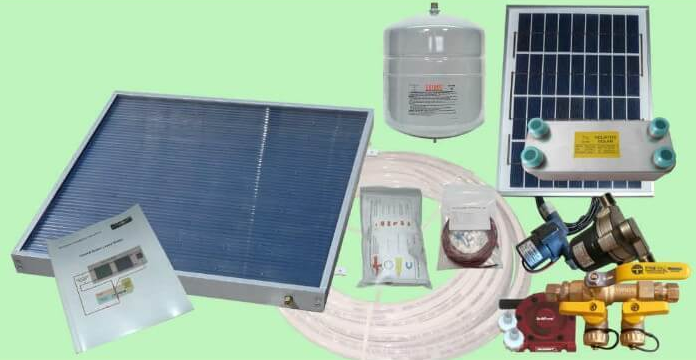 What People Are Saying
"I installed the 6-panel system about a month ago and the results are incredible! During daylight hours you can use all the hot water you want because the recovery time was so quick. Even the water stored in the tank (my old water heater)overnight is still 140 degrees in the morning. You only need the assistance of the heating element in the old water heater if you have long periods of rain or overcast conditions. The system is a must buy and we are super pleased with the results! "
- Paul
"Kudos to Heliatos for crisp, easy installation instructions... I put the four panel kit up on a sunny April day, using 100 feet of pex, and I get 80 gallons of hot 116 degree Fahrenheit water on a sunny day and 100 degree water on a cloudy day, have not used propane since."
- Martin
"Very complete kit, cheap way to cut down your electric bill. Mine is only assisting the hot water heater, typically covering all of our hot water needs during the day."
- Isaac
"Everything went together smoothly and the system generates hot water. Probably will be able to turn the breaker off shortly and use this exclusively for hot water during most of the year here in florida."
- Dana
"I installed the four panel EZ system in Hawaii (sunny) in December (least sunny). I get ~115 on a clear day, and about 95 on an overcast day. I have the thing fitted with thermal sensors driven by Raspberry Pi. At first I was a little worried that it was acting as a water cooler on cloudy days, but experience shows that the water in the loop never moves when the panels are cooler than the water at the bottom of the tank. In Hawaii, at least, the water panels are warm by the time the PV starts the pump. I extrapolate that if the water is hot enough in December, then we'll have excess in March and hotter, so I have a contingency plan to install a constant temp mixer at the tank. I have used water at friends' houses that was dangerously hot -- solar in Hawaii is sometimes almost too successful. Our tank is 55 Gal. Currently two people taking showers, got a house coming..."
- Clork
"I just completed and brought online the Solar Water Heater system on my home for the first time. Let me put it this way: Today is winter on a partially cloudy day with mid 60's air temperature in Florida. The Solar Panels are heating the water to 100 degrees Farenheith. I never dreamed of the high efficiency of Solar Water heating. It's fantastic! Definitely worth the price."
- Susano

SAVE 5% ON ALL HELIATOS SOLAR WATER HEATING KITS

The sale has ended but please shop for solar products to meet your off grid needs.
Shop Solar Now
:|zpendofcontent|:

I received my order several days prior to the estimated delivery date. It was very well packaged and I appreciated the plug and play ease with my RV. The first time I used it, I had my RV in the shade but could still charge my batteries with my Zamora solar 140 watt portable unit. I couldn’t be happier with it. Thank you!

The purchasing experience was great we got our solar panels way quicker than expected in perfect condition. Customer service is great

Solar tech delivered the panels ahead of schedule. There was an issue that the panels I ordered initially were sold out, so they found a comparable panel and gave me the same price. Great service

We have a small 17 foot camper trailer and wanted to be able to camp without plugging in. We are now able to use our water heater, refrigerator, water pump, radio, and cabin lights while the solar panel recharges our battery during the day. The unit is easy to use and seems to be well made.

I ordered the Zamp Solar "suitcase" by phone. The process was efficient and easy. Tracking updates were provided and the shipment arrived on time and in perfect condition. I would definitely order from Solartech Direct again!

It shipped as promised. Arrived in perfect condition. All my questions were quickly responded to. Now I just have to get my wife to stop working so much so I can use this boon docking with our Airstream!

I purchased 2 [solar attic fans], just had them installed. Seems to be pretty good so far! I used one for the garage, even though this is classified for the attic and the garage seems to be cooler than with nothing on the roof other than the. Eating hot sun!